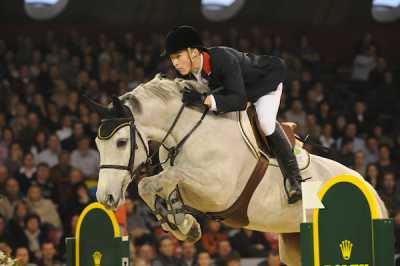 Things to know about upcoming auction ET Auction spoke with William Whitaker, about the grey mare Arielle (Acord) that took him to victory at the Mechelen World Cup in 2007: ‘I was very young and riding for my uncle Michael (Whitaker). I had a good junior horse, but all of a sudden, Arielle brought me in the top circuit. She was sent to Michael by the Belgian client Fabien Schreiber. From the beginning, she was great. She was super careful, had a big heart and a big stride. In our first Grand Prix in Kiel, we placed immediately second. Arielle proved to be a consistent mare. She jumped double clear in Nations Cups, had a lot of placings in Great- Britain and jumped her self in the history books in Mechelen, when she won the World Cup. After a succesful indoor season, we qualified for the World Cup Finals, but she got sold to the Emirates two weeks before the final in Gothenburg.’
William Whitaker hopes that now Arielle can give her jumping genes through to the next generation as a broodmare. ‘She was a nice type and proved her self in the sport. I think that’s what you need for a broodmare. For sure it was a perfect choice to partner her up with the stallion Vigo d’Arsouilles. I don’t think there’s a lot of stallions with a sport record as he has. I also saw some lovely offspring by Vigo d’Arsouilles. For sure I’m curious to see her foal!’

A spectacular collection of 17 young talents who all meet our well-known ET Auction requirements: starting from a ...
» Read more...

They are eager to conquer the fields! All embryos are several months pregnant in the -carrier- mare and ready to ...
» Read more...

Next up - Spring Embryo Edition

One week to go before the fourth edition of our Spring Embryo Auction! No better moment to invest in your new breeding, ...
» Read more...