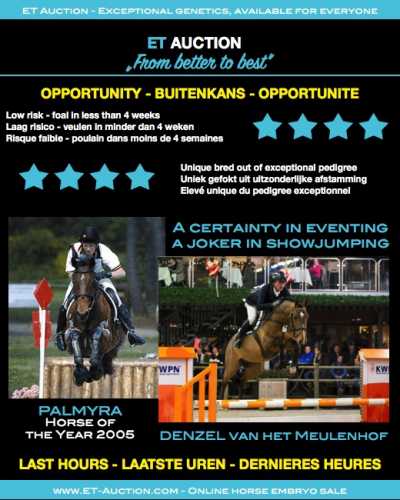 An embryo out of former Belgiums Horse of the Year 2005, Palmyra, and the promising stud and sport stallion Denzel van het Meulenhof. A proven mare combined with youthful enthusiasm.

Palmyra is bred by her rider, the Belgian Karin Donckers. Palmyra was a champion of regularity, a dream horse where you could always count on. Bred from a real eventing family who always excelled in the jumping trials. Palmyra achieved results at the highest level with Karin Dockers. Just like her mother, Jenna, and grandmother, Britt, had performed at the highest level under the saddle of the same Karin Dockers. Her grandmother, Britt, is a sister of the legendary Big Ben (with Ian Miller) and sister of Anna who gave birth to Candy (Pieter Devos) and Millar (Guillermo Obligado).

Denzel van het Meulenhof is a son of Marius Claudius, who jumped his self at the highest level with Robert Smith. Mother is Narcotique IV de Muze, competed internationally under Ludo Philipaerts. Grandmother Qerly Chin, daughter of Chin Chin and internationally successful under the Swiss rider Christophe Barbeau. Further on there are several Grand Prix horses out of this family.

It had to and has become a spectacular end to close the historic year 2020. The Belgian Champion (5 years) Presley ...
» Lees meer...