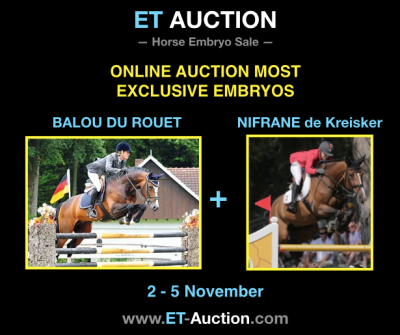 Despite his young age, Balou du Rouet is a trademark stallion of international esteem. More than 120 of his descendants are successful at international level. Each year his offspring enrich not only the finals of the Bundeschampionship in Germany, but also the international level of the sport. His daughter Baloubetta du Soleil won the international in Rotterdam, the licensed stallion Horse Gyms Balzaci has had fourteen wins in advanced classes and the licensed stallion Balloon has competed successfully for the Irish team with his rider Shane Breen. As a young horse, Balou du Rouet won several classes for young show jumpers and was successful in the final qualifier at the Bundeschampionship in Germany. This kind of success is prescribed by his pedigree. A first-class dam line is combined with the world’s number one Baloubet du Rouet, three times World Cup winner and Olympic Champion with Rodrigo Pessoa.

After a thrilling January and February month, where over 30 embryos and over 40 horses changed of owner. It is time to t
» Lees meer...