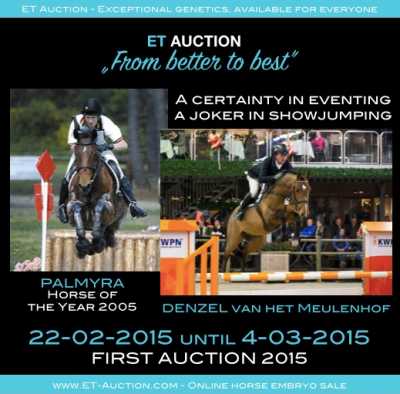 FIRST AUCTION 2015 - Palmyra x Denzel: a Certainty in Eventing, a Joker in Showjumping

The debut year of ET Auction 2014 was very satisfying. A dozen embryos exchanged ownership, over €1000 of commission was divided among the bidders and already more than 5000 people are registered to the website.

2015 we start with an interesting bred eventing embryo. The mother Palmyra was Belgium’s Horse of the Year in 2005 and very successful under the saddle of international top rider Karin Dockers. The father Denzel van het Meulenhof is a young ambitious stallion, bred out of the best performances pedigrees, both on father’s and mother’s side.

It had to and has become a spectacular end to close the historic year 2020. The Belgian Champion (5 years) Presley ...
» Lees meer...