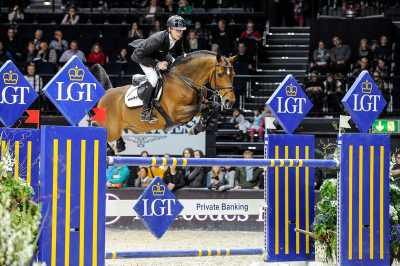 04-10-2014
Galanthis van ’t Merelsnest, 8 years old and currently competing at 1.40m level, is a Lord Z out of Wendelina van ’t Merelsnest. This Wendelina has good sport results and even better breeding results. With Edjaz van ’t Merelsnest and Glasgow van ’t Merelsnest she already gave birth to two approved stallions. Wendelina is none less than the full sister of Sapphire, the legendary horse of Ward Mclain. Ward Mclain and Sapphire won every major championship, including two golden team medals at the Olymics in Athens and Beijing.
Stallion Comme Il Faut, the unique combination of Cornet Obolensky with the famous mare Ratina Z, is the newest top stallion of Marcus Ehning. Jumped his first Global Champions Tour Grand Prix in London at the age of nine and already took a second place in the Dortmund Grand Prix.

After a thrilling January and February month, where over 30 embryos and over 40 horses changed of owner. It is time to t
» Lees meer...